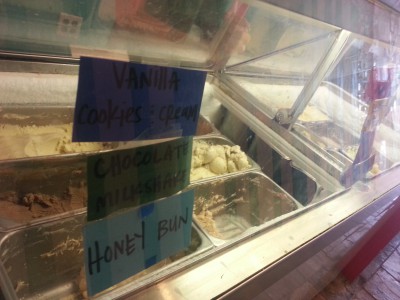 Nestled under a small yellow roof in the square, Rhea’s Ice Cream has been switching up the typical flavors of ice cream for three years. From flavors like coconut avocado, roasted garlic and even goat cheese and honey owner and founder, Rhea Ortmond, hopes to make people stop and taste her funky flavors of ice cream. On January 19th, 2010 Ortmond opened up Rhea’s. She says it all began five or six years ago. Ortmond had graduated from Texas State University with a fashion merchandising degree and had been making ice cream leisurely for friends and parties. One day she decided to just go for it and open her own business.

Ortmond started out with her mom’s old ice cream recipe and has tweaked it over the years. All of the ice cream at Rhea’s is homemade. Ortmond says she uses as many all natural ingredients as she can and most recipes are only five to seven ingredients.

Ortmond thinks of most of her flavors, but she has a suggestion box for customers to drop in whatever crazy flavors they can think of. Each month Ortmond chooses one flavor and tries it out. The flavor of the month for this February is Earl grey tea and sugar cookies. Her very first flavor of the month was buttered toast.

Ortmond says she has gotten suggestions ranging from pink lemonade, buttered popcorn, roasted garlic and spaghetti to her craziest flavor of the month, cheetoh, which was January’s flavor. Ortmond uses the actual ingredients to make whatever flavor she’s cooking up. For her flavor maple bacon, she actually used bacon when making the ice cream—the same goes for the cheetoh flavor. Ortmond said her approach to making the cheetoh flavor was the same concept of dipping a fry in a Wendy’s frosty.

“Why couldn’t you do the same with a cheetoh? And have some vanilla ice cream. It’s kind of the salty-sweet-cheesy… I don’t know!”

Ortmond says she can usually get the flavors right on the first couple tries, but tests her flavors on her friends.

“I kind of have it in my head like what maybe will work and what probably won’t work. I’m just always experimenting and I’ll see some sort of flavor combination and something random like spaghetti. You know just something weird. And I’m like, ‘I’ll try that in ice cream!’ And, for the most part it always turns out pretty good. There’s always somebody that likes it.”

Ortmond has at least two loyal customers. Double major in art and psychology junior, Christine Coester, and her friend, exercise and sports science junior Paige Hartman, have been going to Rhea’s ever since the ice cream shop opened three years ago. The two were walking around downtown to explore San Marcos their freshman year when they stumbled upon Rhea’s.

“We were just walking around and we came across and came inside and discovered all the crazy flavors they had. It was delicious. We love it.”

Coester and Hartman both agree the corn flavor is their favorite, but Big Red and caramel Sea Salt are also pretty good. Ortmond says she tries to not only go for wacky flavors, but also tastes that spark a nostalgic memory or thought in her customers. She says the circus cookie ice cream brings a lot of people back to their childhood.

“I always try to have one that makes people stop and think…WHAT?!…so corn is one of those and goat cheese and honey is really popular. Even the maple bacon people really like.”

Ortmond also has unique cups and spoons. Her condiments are all compostable and environmentally friendly. Ortmond says when she opened up her shop she knew she wanted to have the least amount of environmental impact as possible and that the compostable cups weren’t much more expensive than regular cups and spoons. Ortmond says her ice cream shop is a fun experience that can’t be taken too seriously. She says most people like many of her flavors, but you just have to be brave enough to try them.

“It’s all homemade. It’s a true small business. It’s pretty much just me that’s doing it. There’s a lot of love that goes into it and I just like to have fun with it. You can’t take it too seriously. Some people come in here and get freaked out by the flavors, but once you try it and don’t actually think about what you’re eating, and just try it, you’ll probably be surprised that it’s actually really good. Just come in with an open mind and have fun with it.”

To hear the full Local Businesses Podcast, click the link below. 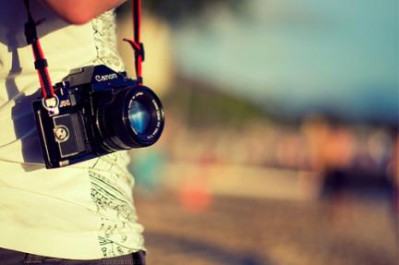 Elise Laird KTSW News There is a wide variety of art that exists in the San Marcos realm, one of the mediums is the use of photography.  Communication design and photography junior, Preslie Cox, is one of the individuals that chose to expand the art of photography through portraiture. Cox started shooting about four years ago. Cox did not know what she wanted to do when she first got her […]