Both teams traded blows to begin the first quarter. UTA went into an early 2-3 zone, trying to make things difficult for the Bobcats offensively. A late free throw from Hood and a mid-range jumper from sophomore guard Sierra Dickson gave the ‘Cats a 15-11 lead entering the second quarter.

The Bobcats struggled offensively throughout the game, shooting 2-24 (8.3%) for the game along with 16 turnovers. However, the game remained relatively close throughout the first two quarters. Both teams continued trading buckets leading up until halftime.

“This game today was difficult from the standpoint that I felt the team really did have an understanding of what it was going to take to win.” Head Coach Zenarae Antoine said. “We had the opportunity to play this team twice this week. We did have time to watch the film and to make and discuss ways we can adjust. We definitely talked about UTA being a good third-quarter team and that’s really where we struggled.”

Texas State did not score its first bucket of the second half until the 06:35 mark after the Mavericks scored nine straight to take a 37-32 lead.

Senior guard De’Sha Benjamin answered with a three-pointer followed by a fast-break layup from senior guard Terryn Milton to stretch UTA’s lead to 10. From then on, the Mavericks never looked back.

The lead ballooned to 16 with just under four minutes remaining in the fourth quarter. Texas State was able to bring the game within six with 00:26 remaining but could not complete the comeback.

Next, Texas State will go on the road to face the Little Rock Trojans at 11:30 a.m. on Jan. 27 at Jack Stephens Center in Little Rock. You can listen live on KTSW FM 89.9 San Marcos, and it will be streamed on ESPN+. 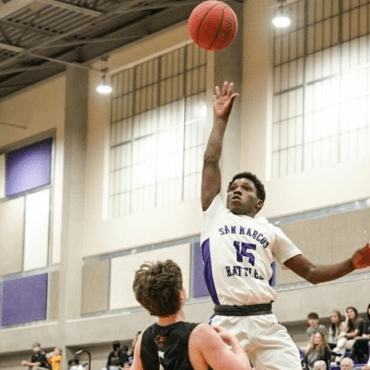 Rattlers Lose in a Nailbiter Against Cavaliers

By Jaysen Collins Sports Reporter The San Marcos High School boy’s basketball team (22-6 overall, 5-1 26-6A) lost a close one Tuesday night against the Lake Travis Cavaliers (19-6 overall, 4-1 26-6A) by a final score of 63-59. Lake Travis started the game clicking on all cylinders as they came out with an 8-2 run within the first two minutes. Coming out of a timeout, Junior forward Malik Pressley scored […]