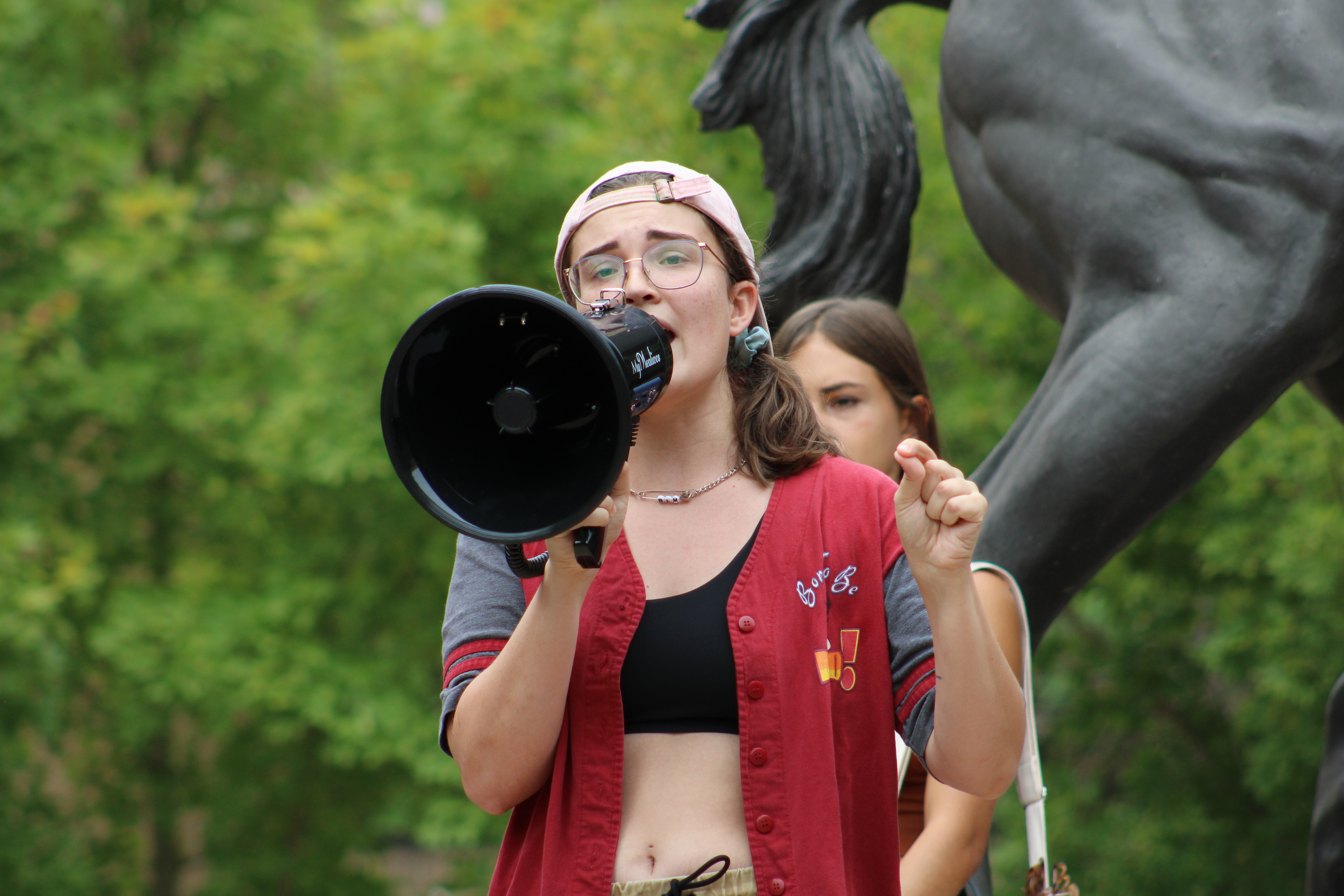 On August 25, 2022, Texas’s trigger law, the Human Life Protection Act of 2021, went into place, making performing an abortion from the moment of fertilization a felony. Anyone who performs an abortion can face up to life in prison and a civic penalty of not less than $100,000. However, the person receiving an abortion won’t face prosecution. Abortion providers can perform the service only if there is “a life-threatening physical condition aggravated by, caused by, or arising from a pregnancy”. When Supreme Court overruled Roe v. Wade on June 24, 2022, states were allowed to decide their regulations for abortion care. This ruling “triggered” Texas’s law.

Abagail Milam created San Marcos Abortion Activists, a grassroots organization, to fight for abortion rights when the Supreme Court’s decision on Dobbs v. Jackson was leaked. In response to the trigger law being enacted, Milam organized a walk-out and rally on the Texas State University main campus at 11:30 a.m. on August 25, 2022. The main purpose of this demonstration was to fight for abortion rights.

What made you start San Marcos Abortion Activists?

Milam: I started San Marcos Abortion Activists in response to the leak of the Supreme Court Dobbs v. Jackson decision. Although I’ve never needed an abortion, I’ve definitely had pregnancy scares. At such a young age, I know I’m not ready to be a mother and am not emotionally capable of enduring childbirth—which is completely valid. The fact that I no longer have this choice in my home state—even if I had a pregnancy as a result of rape—is absolutely deplorable. I also have friends who have actually received abortions, and I feel like it’s important that they know there are people fighting for them in their community. I wanted to start a movement in San Marcos to help protect myself and my friends.

What led you to organize this rally?

Milam: I honestly had been planning to do something like this since Roe was overturned. I think it’s important to disrupt the status quo when our rights are stripped away, and today millions of people across the U.S. have lost what little remains of their right to bodily autonomy.

What are your views on abortion rights?

Milam: I am fighting for free, anonymous abortion on demand, without apology. I think abortion should be safe, legal, and free from stigma.

What are your views on pro-life arguments?

Milam: “Pro-life” isn’t pro-life. If “pro-lifers” cared about life, they’d fight for universal healthcare, free childcare, parenting classes, and a living wage. They’d empathize with rape survivors and offer supportive care resources, instead of forcing survivors to give birth against their will, but I have yet to see any pro-life people advocate for these causes.

How do you feel about the Texas trigger law that was put into place today?

Milam: The trigger law is horrible. My grandmother’s friend had to cross state lines to get an abortion in the 60s and nearly died in the process. It is 2022, and some of my friends have shared similar experiences with me since Roe was overturned. It feels like we’ve traveled back to that time. I’m afraid we will see stories about people getting severely hurt or dying because they cannot access the medical care they need.

What would you want San Marcos residents and Texas state students to do to help your cause?

Milam: Everyone should prioritize educating themselves and others. First, start with addressing your internalized stigma around abortion—I know I’ve had to do a lot of self-reflection as I’ve engaged in this work. Learn about the myths surrounding abortion, and seek out testimonies from groups like Shout Your Abortion. Research which communities will be the most heavily impacted by these bans (i.e. trans, non-binary, poor people and BIPOC). Look into how to perform a safe self-managed abortion on places like plancpills.com, and educate your peers about safe SMA. Lastly, get involved! Host direct actions like rallies and walkouts, vote for pro-abortion candidates and hold your politicians accountable. Advocate for policies like the GRACE Act in your town to help protect people seeking abortions.

What would you want politicians to do?

Milam: Texas State Legislatures need to legalize abortion. Abortion rights need to be codified into law, and the federal government needs to repeal the Hyde Amendment so that all abortion seekers can receive care at no cost.

In this edition of Claws to the Wall, Justin Brown, Koby Jackson, and Paxton Graf talk Texas State Soccer's hot start. They also dive into the quarterback decision for the Bobcats and give some predictions for the upcoming NFL season. Be sure to catch Claws to the Wall every Thursday on Apple Podcasts and Spotify and Fridays on the KTSW blog. https://soundcloud.com/ktsw89_9/txst-quarterback-decision-and-nfl-preseason-favorites?si=21c7975da17844468444413f8097cf96&utm_source=clipboard&utm_medium=text&utm_campaign=social_sharing Image Credit. KTSW Multimedia Department