As a photographer one of my favorite ways of editing a photograph is in black & white. I feel like having a photo in black & white can just give a whole other meaning to a photograph and makes you wonder about what the story behind it is. I want to share this collection of photographs I took at UTOPiAfest that are all in black & white for the exact reason of wanting someone to think deeper about the photo. When I try explaining my time at UTOPiAfest I find myself having some trouble because it was just such an amazing festival, one of my favorite festivals in fact, and something like that can’t just be explained verbally. Instead, I show whoever I’m explaining my time to these photos so they can visually see my experience and really get the feel of what my time at UTOPiAfest was like.

I had the opportunity to attend UTOPiAfest on September 22, 2017 for two days thanks to KTSW. I am apart of the multimedia and social media departments as an assistant and a photographer and applied for press coverage for this festival. I didn’t know much about it or the bands that were going to the festival or what to even expect from going to this place. All I knew was that I was going to be joined by another KTSW photographer and social media assistant, Renee, who I am also friends with so I knew it would be a good time. We sort of went into this thing blind. We had both never heard of this festival but we were ready for anything that came our way.

These photos will show you our time at UTOPiAfest from us getting to Four Sisters Ranch, setting up our camp, covering multiple bands, getting free tea at a tea lounge in the middle of the festival, meeting a man that was streaming his own radio show in his tent, to seeing art all over the festival, the beautiful Utopian views and so so so much more. 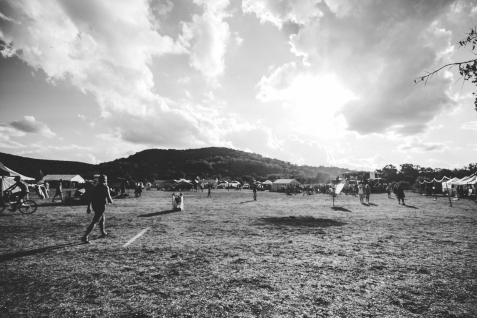 One of the best things about UTOPiAfest is the location because of these beautiful hills surrounding us. 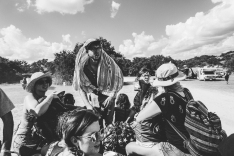 In order to get to the festival grounds we had to take this trailer full of our camping gear along with other festival attendees.

It took Renee and I a good minute to set up our camp. 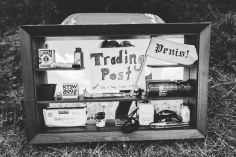 Found this gem and decided to make a trade with our KTSW stickers.

Evratt from The Halfways band really feeling his set.

Wide photo of the band Baskery during their insane performance. 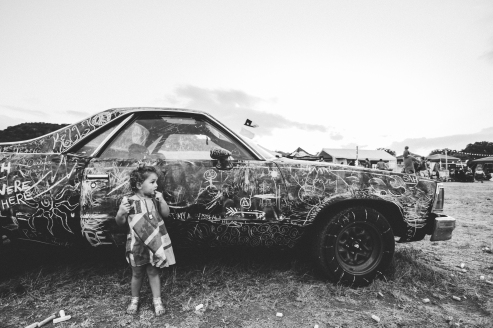 This car was set in the middle of the festival and people were able to write/draw anything they please with chalk.

Art that was also a play area for kids. 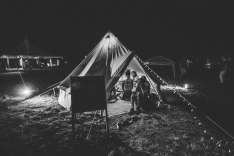 Tea Lounge in the middle of the festival where you had to take off your shoes in order to get in.

Tea was made while everyone learned about the tea.

Tea was given out in these small cups. I had a good 10. 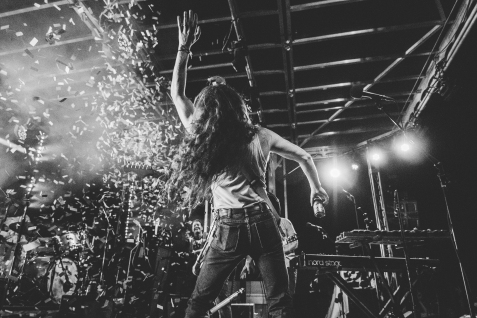 Birthday celebration for a member of Wheeler Brothers.

Shot of group of friends showing off their UTOPiAfest fashion.

Our essentials for festival coverage.

After the first night we edited any photos or videos we had in our tent at 3AM.

Portrait of Mobley after his set and interview with KTSW. 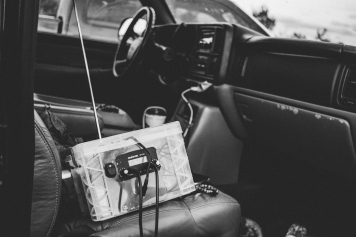 Radio box made by a man from a motorcycle battery where he was able to stream on to 106.7 from his campsite.

The same man that made the radio box made this dome where he sleeps and hangs with bands from the festival.

The man with the radio and dome. We had a chat with him about his dome, the time he attended Burning Man and why he had the idea of streaming live from his campsite.

Inside of the man’s dome there were hammocks and swings everywhere.

Portrait of Alan Eckert from The Deer on artist campgrounds.

Wild Child sitting at the very front of the stage after telling the whole crowd to sit down on the ground so that we could all listen to the song the dedicated to a couple that go engaged during their set.

A really nice view of the Tea Lounge on the last night of UTOPiAfest.

All packed up and ready to go.

A selfie with Renee right before we left the festival grounds. We were real proud of ourselves for covering this festival successfully.

Driving back to the real world while listening to tunes from newly discovered bands at UTOPiAfest.

All images taken by Lucero Trevino.

One thought on “UTOPiAFest in Black & White”