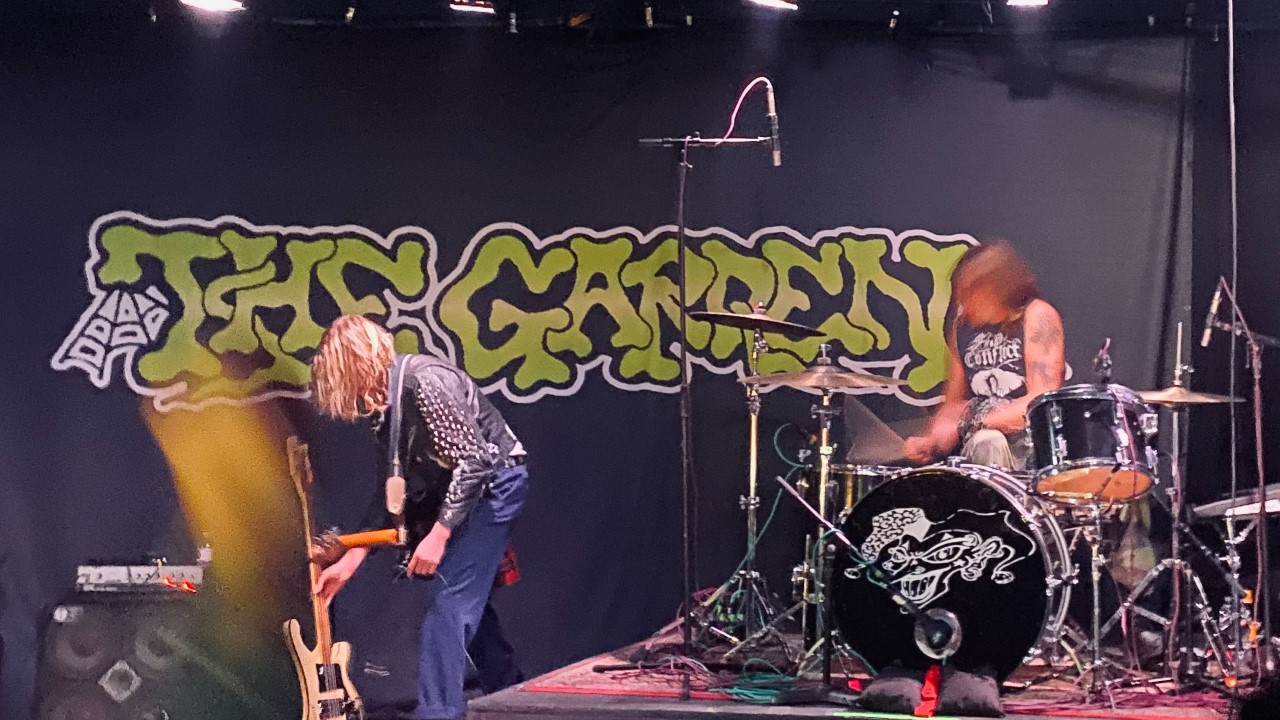 After postponing their Kiss My Super Bowl Ring tour twice since 2020, The Garden is back and performing on tour once again!

The Garden is an experimental rock band from Orange County, CA consisting of twin brothers Wyatt and Fletcher Shears. They have released six full-length albums since 2012, and have even published their own record labeled, Vada Vada, based on their self-created musical genre.

Tickets to their Paper Tiger set in San Antonio sold out a few months ago, so I knew that this show was going to be packed. I was in a long line of people outside of the venue for an hour and a half before being let inside. The workers and security got everyone in quickly, making sure to scan IDs and vaccination cards before letting fans in. I noticed that my friend and I were older than most people there, by looking at all of the black Xs on the backs of everyone’s hands.  The Garden’s fan base is mostly teenagers, as seen from their social media platform statistics.

I tried getting as close to the barricade as I could and we waited an hour before The Runts opened the show.  As soon as they came out, pushing, moshing and head-banging started to begin. I did not expect less, knowing that The Runts is a hardcore punk band but I could see the expressions of younger girls around me start to drop. Nevertheless, I have never heard of this band, but their set was a great introduction and set the overall energy for the show.

After The Runts ended, I talked to the girls around me and also told my friend that they could lean on me if needed throughout the show. I have been to rock and punk concerts before, so I know how to live through a crowd when it gets too rowdy — I was not too sure about the people around me though.

The Garden quickly came out to perform around 10 minutes after The Runts left the stage. They opened up with “Clay,” their 2017 hit that made the crowd go wild. I paid close attention to Fletcher on the drums was absolutely amazing and provided so much energy even behind a drum set. Wyatt made sure to use every inch of the stage, even with his mic attached to a stand. I would think that both of their voices would be out due to screaming and singing almost every night, but Wyatt and Fletcher still had liveliness in their vocals. Between songs, Wyatt would play mini-bass solos (which excited me, since I have seen Wyatt’s solo skills on his TikTok) that everyone seemed to enjoy as well.

The songs that everyone pushed, screamed and jumped for was “Please, F**k Off,” “Sneaky Devil” and “:.”  At this point, I was not at the barricade anymore and I unwillingly moved to the corner right side of the stage. The concert etiquette that the crowd possessed was nothing I have ever experienced before. The people behind me were hesitant to let others out and used the opportunity to push and crowd the fans in the front to get closer to the stage. While moshing was going on, strangers were grabbing onto the back of my pants, my belt and even pinching hard onto my arm. The new wave of concert-goers who mosh and push people who
are notably uncomfortable make concerts go from fun experiences to potentially dangerous situations.

The entire experience for me was mixed with both positive and negative parts. The performances that The Runts and The Garden put on were phenomenal, and I would love to hear them live again. The only downside was the lack of compassion from the crowd, it caught my friend and I off-guard and made parts of the experience very unbearable. If I do get a chance to see The Garden again, I will definitely take it (I’ll just be off to the side though!)

Listen to The Garden on Spotify!

Listen to The Runts on Spotify!

Rick Poulter Out After 14 Years

By Jordan Young Sports Director Sports Information Director Rick Poulter is no longer working for Texas State Athletics. According to a  source, Poulter’s last day was January 3, 2022. Poulter was the sports information director at Texas State from February 2008 to January 2022. Prior to working at Texas State, Poulter was the assistant sports information director at the University of Houston for 21 years. The search for a Poulter’s […]