The Dynamic Duo of Courtney Barnett and Kurt Vile 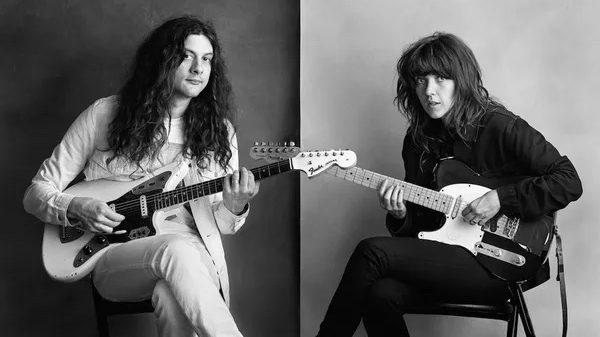 Sony and Cher, Willy and Waylon, Bert and Ernie — all iconic duos, but now it’s time for a new team to carry the torch. This would be no other than Courtney Barnett and Kurt Vile, solidified by their joint album Lotta Sea Lice. The two have each provided some of the most creative and inspired songwriting on their own in the last couple of decades, but together are creating a sound that will last forever.

Unlike other duos such as Sonny and Cher or the White Stripes, Barnett and Vile have always just been friends. Barnett was dating fellow Australian rock star, Jen Cohler, during the recording of Lotta Sea Lice, and Vile is married with two daughters to professor Suzanne Lang. But this is no reason to downplay their relationship and how well they artistically mesh with one another. Barnett has described them as being extremely similar people, saying as soon as they met, she knew they were on the same plain.

Barnett grew up in Australia and started learning the guitar around the age of 11 from her older brother. She has said just about the only rock music in her house growing up was on a cassette gifted to their family by a neighbor. This is where she would first hear American music like Jimi Hendrix, Nirvana, and Green Day for the first time. Eventually, she would find bands like Wilco, Talking Heads, and Australian bands like Magic Dirt. After a few years on the guitar, she would use this inspiration to form bands playing everything from grunge to Australian psych-country.

Barnett would then go on to play lead guitar for Jen Cohler before putting out her own album, A Sea of Split Peas. Featuring the song “Avant Gardener,” the true story of Barnett’s near-death experience from an allergic reaction while gardening. However, the song is much more than a warning against horticulture. It features some of the most originally psychedelic guitars in music today. Accompanying the music is the relaxing, melodic, and ever-flowing lyrics that make you feel like you’re listening to a lifelong friend telling you a story.

This is a staple of Barnett, the voice that makes you feel comfortable enough to let your guard down and relax. This accompanied with Viles always flowing and ever changing guitar on songs like “On Script” from Lotta Sea Lice exemplifies what makes them mesh so well together. Each of them tell a story with both their voice and instruments that invites you in and sounds just as familiar the first time as the last.

Vile was born in Pennsylvania to a father who listened to bluegrass music and gifted him a banjo as his first instrument. Vile always appreciated the genre and instrument but actually played the banjo as if it were a guitar. He would create his first recordings on the banjo at age 14 and by 17 would have recorded another album, this time on the guitar and inspired by alt-rock bands like Pavement.

He eventually became the lead guitarist for the indie rock band, War on Drugs. While touring in Europe, he also opened for the group as a solo act. This is where he realized his true passion and soon after focused on this full time, releasing his debut album Constant Hitmaker the same year. Since then Vile has cemented himself as one of the best fingerpicking style guitar players across genres. His skill is particularly evident in his song with certified fingerpicking style guitar legend John Prine, “How Lucky.” By working with Prine, Vile earned the ultimate seal of approval from a legendary artist whom he has often credited as one of his inspirations.

“Continental Breakfast” from Lotta Sea Lice demonstrates Vile’s fingerpicking mastery and how it sets the tone and allows for Barnetts psychedelic exploration to expand upon an already beautiful musical landscape. The quick-flowing mystic rhythm from Vile establishes the world their music places us in. Barnett uses the lead guitar to do just that, and lead us throughout their story with mesmerizing and perfectly placed notes. This paired with both of their soft and friendly voices, singing what sounds both natural and poetic, creates a genuine type of magic on another level than any other duo in music today.

Together, Barnett and Vile bring exactly what is necessary for a brand new sound that feels extremely familiar. This is exemplified no better than in their song “Over Everything” also from their album Lotta Sea Lice. The two go back on forth both on guitar and in words not mirroring but matching each other the same way childhood best friends do. Playing and exploring with their instruments and lyrics in ways only achieved by duos who are truly musically meant for one another.

Claws to the Wall: Softball and Baseball Sweep the Weekend

By Justin Brown, Koby Jackson, and Kayla Guillory Sports Reporters https://soundcloud.com/ktsw89_9/claws-to-the-wall-softball-and-baseball-sweep-the-weekend?utm_source=clipboard&utm_medium=text&utm_campaign=social_sharing In this edition of Claws to the Wall, Justin Brown, Koby Jackson, and Kayla Guillory talk the Bobcats weekend sweeps. They also dive into the terrific first round matchups of the NBA Playoffs. Be sure to catch Claws to the Wall every Tuesday and Thursday here at KTSW Sports. Featured Image by KTSW Multimedia