The National Weather Service issued a flood watch yesterday to the following counties, Hays, Travis, Williamson, Bastrop, and Caldwell. According to the NWS, the flood watch will be in effect until Wednesday afternoon. However, strong winds and heavy rainfall are possible due to showers and thunderstorms through Saturday.

The National Oceanic and Atmospheric Administration weather monitoring stations throughout Central Texas concluded that the San Marcos area received around .52 inches of rain from the showers yesterday evening.

According to the NWS, San Marcos has a chance to see rain and thunderstorms after 4 pm today. “Some of the storms could produce heavy rain, bringing new rainfall amounts between a tenth and quarter of an inch, except higher amounts possible in thunderstorms.”

The northern parts of Texas received upwards of 8 inches of rain from the showers yesterday causing major flooding and road closures.

“If there are any major disruptions or flooding within the City of San Marcos, we will put out warnings and other messaging on our accessible social media channel,” said San Marcos Emergency Management Coordinator Rob A. Fitch. The city will close any impacted roads and low-water crossings if necessary.

Although San Marcos and the surrounding communities will be receiving an amount of rain not seen in over a year, it will not be enough to take Central Texas out of the drought. The state of Texas would need to receive around 10-15 inches of rain to end the drought.

While walking to class or driving to work, make sure you plan accordingly and remember if you come across a flooded street, “Turn Around, Don’t Drown.” 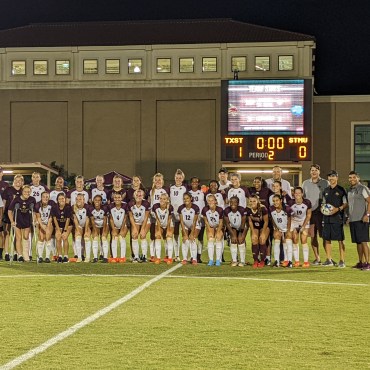 Tabby Keep Sports Reporter Texas State soccer put on an exciting show in their first home game and win of the season against the St. Mary's Rattlers. The stands were packed on Thursday for the showcase of the women's soccer team under the new direction of head coach Steve Holeman, along with associate head coach Henry Zapata and assistant coach Nathan Stockie. This game marked the fourth matchup between the […]