In April, music fans watched as historical Sundance Records shut it’s doors and closed the local gateway to vinyls, CD’s and music related gifts. Music enthusiasts need not worry, as Lonestar Music emporium jumped on the location as soon as their lease on their New Braunfels location was up, moving their enthusiasm for music directly adjacent to the Texas State campus.

Store owner Zach Jennings has partnered with Lonestar Music Magazine producer, Richard Skanse, for a unique business model. Together, the two own and operate a Music Magazine that is circulated for free around central Texas, the new store in San Marcos, and an online store with an expansive discography. Jennings says that the location and size of the store will allow him to expand his business where his old location in Grueene had limited him. “We had to have a vinyl rack there”

Merchandise in the store reflects part of a greater tend, a music merchandising industry which is increasingly tailored to individual preferences and tastes. An in-store t-shirt printer stands ready for the task of printing a group of shirts for a club team, or single unique shirt unlike any other. A wide selection of Houston hip-hop lines the racks for music lovers of that specific genre. The goal of storeowner Zach Jennings is to provide a go-to place in San Marcos for unique merchandise and gifts. Even more central to their aims, is a tailored music selection – specializing in Texas artists.
“QUOTE- already cut.”
“you should see the selection of texas music. it’s incomperable. 7:05”
Along with being a hub for unique novelty items, the store will host in-store performances- bringing the music to the consumer for a close experience.
“QUOTE”
While San Marcos music lovers remember the legacy of Sundance, Superfly brings an up-to-date business model which reflects new buying patterns of music enthusiasts – when much of the content is available online through streaming services or can be illegally downloaded, the industry must shit. In this case, perhaps to rely on the fans who value the album art or the audio quality of vinyl. Tune in next week to hear more about music merchandising.

Earlier this month, Californian band Why? released their fourth album titled “Mumps, etc.” The band was born in Berkeley, California of 2004 and is composed of Jonathan “Yoni” Wolf, his brother Josiah Wolf, Doug McDiarmid (Dyarmid) and Liz Hodson. The band is currently touring the US, but starting November, Europe seems to be its destination.“Mumps, etc” has some kind of indie rap flavor in which it is not sure if the music is made to make you feel and enjoy it or just created for self thought with curious lyrics.

The album’s first song, “Jonathan’s Hope,” starts as an interesting story which tugs at you to listen to its self-evident lyrics, yet once the song reaches its halfway point, you realize that the singer, “Yoni,” will continue to deliver the same feeling of complaining towards life. The song that stands out in this album is “White English.” This rhythmic song is where the indie rap uniqueness of Why? comes to life. The whole song instantaneously becomes a rhythm that bops your whole body, and promises to finish with you craving for more.

The last song that stands out is “Sod in the Seed.” Why? accents its power to rap the feeling of daily emotions into this song. Its upbeat music mixes with strict vocals and makes the theme comparable to your own opinion. Why? has a unique style of delivering its opinions in life to its listeners through its rhythmic flow. “Mumps, etc” was a roller coaster of music experiences. Some of the songs keep you in a constant thrill that is very well delivered, but other songs bore you with the sickly feeling of its lyrics. Like it or not, Why? seems to achieve the feeling they are going for through their lyrics combined with matching emotional melodies in “Mumps, etc.” More information can be viewed at why-with-a-question-mark.com 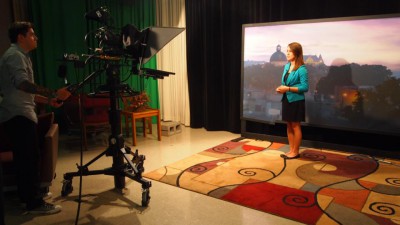 Valerie Gomez Social Media Contributor Hey guys, it's time to let you know what we've got coming up this week on Other Side Drive! This time around, I'll be giving you some information about a couple of our many awesome segments for the week. On Monday, you'll be hearing from Shannon Williams during our Money Share segment. She spoke with the guys behind Superfly Music Emporium, a music merchandising store […]