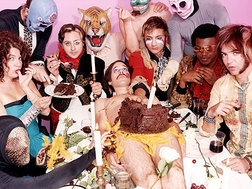 Front man, Kevin Barnes founded the fun-loving band Of Montreal in 1997. The band hails from Athens, Georgia and is currently on tour and hitting up Texas very soon. On Tuesday, December 4th, Of Montreal will be playing at The Mohawk in Austin, Texas. More info can be found at www.ofmontreal.net or http://www.mohawkaustin.com

Artistic expression is exactly what Of Montreal represents. Barnes expresses his mind in entertaining forms from live performances of Barnes wearing a 10ft. dress at Coachella to the experimental well-produced sounds on albums such as Skeletal Lamping.

Of Montreal is currently raising funds for a feature-length documentary, “Song Dynasties.” Song  Dynasties will include recent and past video footage and music from the band, including never before released songs. From the looks of the trailer, the band has been through many ups and downs as any other band, but has persisted on. It’s clear that Of Montreal is fun-loving and easily captivates any ear or eye. The documentary is set to release Spring 2013.

More information at http://www.ofmontreal.net. To see the band this Tuesday in Austin, check out http://www.mohawkaustin.com.

Other Side Drive Catch-Up

Other Side Drive Chocolate Charlie and, guest host, Radio Ryan jammed out with Austin’s The Blind Pets. “Music is the way that life sounds” -The Blind Pets Michelle and Melissa mixed it up Texas State alum’s and the Marriot’s Tara about putting on the Bridal Expo earlier this month. “It’s open to everybody not just the brides” -Tara from the Marriot about the Bridal Expo Garrett and Stephanie take funk to the next step with Austin’s Groove Think in the […]