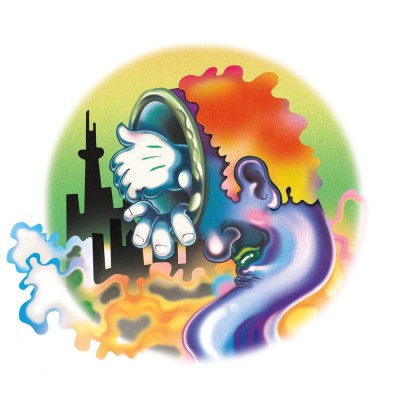 Hailing from Boston, Guerilla Toss are masters of their genre―if anyone could name what that genre is. So far, their music has beckoned an eccentric array of genre tags like new age­-rage, mosh-­funk, shit-­wave, brutal psychedelia, or no­-wave. After being turned on to them from one of Hype Machine’s exclusive premieres, my ears routed them as psychedelic, industrial, jungle punk funk, which is about as inconclusive as a description can get. However, as they’re comprised of the oxymorons of their belligerent grooves, sporadic arrangements, and cacophonic harmony, it’s about the treatment they deserve. With their first release in 2012, Guerilla Toss has channeled through most of the key avant-rock labels like Digitalis Limited, NNA Tapes, and Feeding Tube, leading to the full­-length album released under DFA Records named Eraser Stargazer. This label­ success is evidence that Guerilla Toss draws attention everywhere they go, and it’s easy to understand why. Although their music can be quite daunting, it had no problem possessing me all the way to this review.

The first thing that hits your ears is rightfully one of Kassie Carlson’s blaring exclamations, which announces the signature of her vocal style. Following is a beat drop that is absolutely centrifugal in the most literal sense. The Unknown Mortal Orchestra-­like bass line is surrounded by a cycling hi-­hat that makes your body circle like it is sitting on a crank. This first track, “Multibeast TV”, is a clear demonstration that Guerilla Toss mastered psychedelia as the sonics hit you in an unexperienced way, but in a way that is still strong in its own right. Carlson’s elastic yelps slice through the whole album without ever dipping into harmony. In the first tracks, you may predict boredom due to the lack of melody, but Carlson’s performances keep you on your toes by ranging from freely yelling and squeaking, to rhythmic screaming found in “Diamond Girls”, to OOOOOOOOWOPs found in “Perfume”.

The music behind Carlson maintains a theme but stays ever-­altering. Signed by clanging guitars, sliding synths, tom-­driven drums, and prominently gurgling bass lines, the instrumentation gives you an option to dance, mosh, or stare straight forward. With that, let it be said that Guerilla Toss’ popularity was founded on their spirited, thrashing live shows. However, tread lightly on that YouTube search bar, and do not be surprised if you find a certain guitarist going commando with no pants on. That said, understanding the calamity of Guerilla Toss is an experience I’ll recommend for anyone, whether or not it makes it to your music collection.