As an avid listener of all things indie rock and pop, I am always on the lookout for new singles and albums to add into my daily mix. We may only be a little over three months into 2018, but it looks like it is already going to be a great year for music. If you’re craving some new music or feeling a little behind on what’s fresh, no worries because I’ve compiled a 15 song playlist to satisfy your indie music cravings. This playlist consists of a variety of sounds and artists. From Grammy nominees to 17 year olds who live with their parents, this playlist is pretty inclusive. I’ll delve into a few of my favorites and then go give this playlist a listen!

The Drums – “Meet Me in Mexico”

I was quite surprised to see that The Drums released a single this year considering that they just released a new album, Abysmal Thoughts, last summer and they’ve been touring non-stop since then. However, this was a pleasant surprise to say the least, because this song is filled with the quirky guitar melodies and bold lyrics that The Drums are known for. Aside from how awesome this song is, it was also released for a good cause. This energetic love song is available on bandcamp to purchase and all proceeds go to two earthquake recovery organizations, Reconstruir México and Lago Tanganica 67, to aid in recovery for the earthquake that affected Mexico last fall. The Drums’ frontman, Johnny Pierce stated “Mexico, I love you and I’m with you.” in regards to the earthquake and his frustration with politics in America. This is also expressed in the lyrics that are sung in spanish and later in english “I can’t party with these dumb Americans” and “No puedo bailar con estos gringos locos.” He also sings “I’ve lost my faith in everyone who leads us,” referring to Donald Trump. 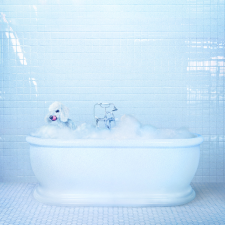 This is the third and most recent song that Frankie Cosmos has released this year. With the recent announcement of their third album, Vessel, that’s scheduled to come out on March 30th, these songs should get you pretty pumped for it. Vessel will be an 18 track album that features the three singles that the group has released thus far which are “Jesse,” “Being Alive,” and “Apathy.” Lead singer, Greta Kline carries this song along nicely with her whipsy range of vocals and distinct inflection on particular words.

“Talk” is off of Atlas’s debut album All Talk!. Although Atlas released an EP back in 2013, this is his first full-length album and its sound definitely differs from his first EP, Lost in the Waiting. While Lost in the Waiting has a more acoustic, Ed Sheeran inspired sound, his latest album has a fresher indie pop sound that I tend to gravitate towards. His musical career really took off when he was a contestant on the The Voice. Although he didn’t win, he made it pretty deep into the ninth season. I’ve actually never listened to an artist that was on a singing competition show so I was pretty surprised to see that Atlas was a contestant. Despite the fact that this album only features seven songs, each one packs a punch and leaves listeners ready to dive into the next. “Talk” is no exception. The funky bass and playful synth mixes with Atlas’s silvery voice to create an easy-going pop song.

Although this track has technically been floating around since October of 2017, it was just released on major streaming services this year so I think it deserves a spot on this playlist. Mellow Fellow’s signature twangy guitar and Floor Cry’s voice combine seamlessly in this longing ballad about a New Year’s Eve spent alone. This track also features a sick guitar solo in the middle that adds to the song’s complexity. This isn’t the only collab that Mellow Yellow has released this year. “You’ll Be Alright” also came out on streaming services this month featuring Alyana Cabral from the group Teenage Granny. In an interview with Scout Magazine, Ralph Lawrence Reyes a.k.a. Mellow Fellow dished that fans could “hopefully” expect a new album by the end of this year featuring these two singles and also “Dancing” and “How Was Your Day” which is another collab but with Clairo. Based on the singles thus far, I have high expectations for the album.

Varsity – “Must Be Nice”

This is Varsity’s second single that will be featured on their upcoming album that’s set to come out on April 27th. To get a better feel for what to expect on the album, Varsity offers a playlist on Spotify that features songs they listened to while writing and recording their new record Parallel Person. The beginning of the track comes in with a twangy guitar that is reminiscent of Mellow Fellow’s “New Year’s Eve.” Lead vocalist Stephanie Smith leads the chorus throughout the song and the piano that follows the bridge mirrors the melody of the chorus.

Like many of the songs featured on this playlist, “Off and On” begins with a repetitive guitar melody that continues for the duration of the track. This song is characteristic of Sales’ unique chill sound but also has a new twist. I think this stems from the secondary guitar that counters the main guitar and the overall tone of the song. As a big time Sales fan, I hope that this single and their other single “Talk A Lot” mean that a new album is in the works. The album artwork for the two singles is cohesive just like their singles for their debut album, SALES, so fingers crossed that this is an indicator for a new record.

Unlike some of the other songs on this playlist, this track is brought in with a synth that sounds like it belongs on STRFKR’s fifth album Being No One, Going Nowhere. This is the closing song on The Undercover Dream Lovers’ newest EP that was released just this month, In Real Time. The funky bass and psychedelic synth accompanied with piano layers in this track to create this group’s signature psychedelic indie rock sound. Since the EP is only six songs long, its sound is super cohesive so if you like “Let Go,” you’re bound to enjoy the whole project. For Spotify listeners, The Undercover Dream Lovers went a step farther with this EP because each single is accompanied with an encompassing looped video that visually aids in setting the tone for each song.