Exploring the Menacing Beauty of Dummy 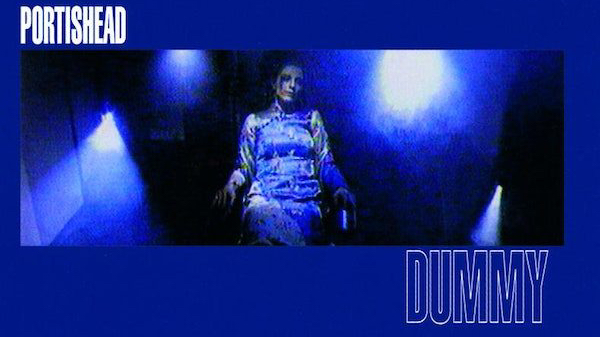 In many ways, the 1990s served as a transitional period for music. Following a decade dominated by hair metal and dance-pop, the ’90s would make a name for itself by largely shedding the happy-go-lucky attitude, and taking on a much grittier approach. Sure, popstars still dominated a sizeable portion of the industry, but mainstream music was undeniably being taken in a new direction.

Bands like Nirvana and Alice in Chains cemented themselves as grunge pioneers, combining unfiltered vulnerability with distorted guitars and a punk-like attitude. Hip-hop had skyrocketed in popularity, touting some of the biggest stars the genre had ever seen. Both styles of music carried a raw energy that captivated listeners who had been yearning for a breath of fresh air.

As the musical landscape shifted and the status quo was challenged, artists had newfound space to experiment with blurring genre lines.

Widely considered as pioneers of the trip-hop genre, Portishead was formed in 1991 as a three-piece group. Beth Gibbons, Geoff Barrow and Adrian Utley were at the helm, with engineering contributions coming from Dave McDonald.

The Portishead name came from the small town that Barrow grew up in outside of Bristol. The group was initially formed through a chance meeting between Gibbons and Barrow while they both attended an entrepreneurial course in Bristol, England. Utley would join in once the duo began recording their first album.

Each member came from a very different musical background. Utley was largely a jazz musician and producer, touring as a sit-in guitarist during the prior decade. Barrow’s influences were more expansive, with experience in everything from punk-rock drumming, to hip-hop producing, to movie score composing. Barrow had made quite a name for himself in the ’80s thanks to his turntable skills.

Utley and Barrow handled just about everything from an instrumental standpoint, but the voice of Portishead was solely Beth Gibbons’. Gibbons was an aspiring singer who had moved to Bristol in 1987 to pursue her dream. She was greatly influenced by jazz and blues singer, Nina Simone. While her voice was not especially powerful, Gibbons’ haunting tone would serve as the group’s catalyst.

The amalgamation of artistic styles would prove to be not only a success, but an experimental masterpiece. Portishead’s first album, Dummy was released in 1994 to massive praise from listeners and critics alike. With four million copies sold worldwide along with a triple platinum certification in the UK, the album was a commercial hit as well. Dummy did not reach immediate success in the U.S., but over time it garnered its own cult following with American listeners.

The success of this album is not by coincidence. There are albums that sound great, and then there are albums that stick with you long after you listen to them. You would be hard pressed to find another album that burns itself into your memory more effectively. With that in mind, I’d like to break down what makes Dummy so unforgettable.

First and foremost, I have to at least make an attempt at describing the album sonically. As previously mentioned, many music publications have dubbed Portishead as trip-hop pioneers. Trip-hop could best be described as atmospheric, down-tempo music that incorporates elements of jazz, funk and hip-hop, as well as the use of samples.

This genre of music originated in Englandnand got the name because of its psychedelic and experimental nature. While Dummy undoubtedly fits this bill, I would argue that its sound goes further than that.

Of the extensive list of words that could be used to describe this album, “enigmatic” probably does the most justice. Much of its runtime plays like it is straight out of a crime noir film. The album’s opener “Mysterons” sounds exactly as the title would suggest.

An immediate sense of uneasiness is established within the first thirty seconds. Quiet, echoing guitar strings open the song, soon layered by the scratch of a turntable. A rolling snare and kick drum pattern starts up, topped off with a wobbly synth riff that sounds as if a UFO was about to touch down on earth. All of this sets the stage for Gibbons’ introduction. Barely louder than a whisper, Gibbons’ voice immediately takes command of the track and never lets go. The opening is chilling and mysterious, but most of all, intriguing. By the time the five minutes are up, you will have officially entered into the Dummy wormhole.

Rather than following a definitive narrative, the album is much more concerned with creating an atmosphere. It sounds foggy, isolated and brooding. This sound very intentionally reflects the blunt subject matter of many songs. Death, loneliness, womanhood and troubled romance are scattered all throughout, constantly being mirrored by each instrumental. With a tone effectively set, Portishead finds themselves with ample room to experiment stylistically.

As the tracklist progresses, Barrow’s hip-hop background really begins to make its way to the forefront. The use of turntables is prominent throughout just about every track, injecting down-tempo beats with a shot of adrenaline. A good deal of the instrumentals are carried by a familiar boom-bap drum style that was a staple among rap production of the time. The layering of samples within songs helped to contribute to the hip-hop influence as well.

The song “Strangers” is one of the grittiest on the album, and probably the closest thing to straightforward hip-hop that the tracklist has to offer. The beat is murky and unrelenting, constantly being driven by some diabolical sounding distortion and what could only be described as a beeping dial-tone slowly being submerged underwater. The rhythm pulsates as if you were pressing your ear up against someone’s chest, listening to the thud of their heart. “Strangers” is the kind of music that makes you want to get into a night of degeneracy and worry about the consequences later.

Inspiring degenerate behavior is one thing, but some of the tracks off Dummy just sound downright evil. If the album plays like a crime thriller, then a good portion of it is from the villain’s perspective. “Sour Times” is as sexy as it is devious, and sounds as if it were intro music to a Bond villain’s lavish palace.

One of the jazziest cuts off the album, Portishead samples a piece from Argentinian composer, Lalo Schifrin, to layer with the track’s horn section. This sample would prove to be a stroke of genius, as it resulted in maybe the most memorable aspect of the song. The sampled instrument is called a Cimbalom. Originating in Eastern Europe, the Cimbalom is like a combination between a harp, cymbals and a xylophone. Metal strings are stretched across a trapezoidal box, and sounds are created by using sticks to pluck or hit the strings. The result is a metallic, rattling noise that can be made to sound beautiful, but in the case of”Sour Time” — is used to menacing effect.

“Wandering Star” is another standout track, delving even further into sinister depths. This is one of, if not the darkest, cut on the album. It leapfrogs right over crime-thriller and lands closer to horror territory. The song personifies grief with its utterly oppressive bleakness. It’s so bare, driven by little more than a monotone organ note and a tin-like ride cymbal. Gibbons’ absolutely unnerving delivery takes care of the rest.

When discussing the album’s sound, I felt like it was necessary to save the best for last. Even though I briefly touched on Gibbons’ importance to Portishead earlier, I would be remiss to not go into a little bit more detail about her contributions. Gibbons’ role is to lend cause to the chaos created by Barrow and Utley. Her presence serves as a reminder that humanity lies beyond even the coldest of exteriors.

My favorite thing about Gibbons’ performance throughout Dummy is how understated it is. She has a subtle approach to vocals that probably shouldn’t work considering she’s the only voice on the entire album. Somehow though, it does. She’s so sneakily dynamic with her voice, switching from angelic, to sexy, to creepy without a second of warning.

Gibbons’ tone is so entrancing that you won’t even notice it’s crawled under your skin until after it is already buried deep. She completely sells the album’s darkest moments with her tortured delivery. You can feel her pain through the speakers. While many artists choose to make light of grief, Gibbons does the exact opposite. True sadness is scary and uncomfortable, and she doesn’t shy away from any harsh realities. That’s the beauty of her performance. She’s not telling you it is going to be ok, she’s just telling you what it feels like.

In my opinion, her shining moment comes on the track “Roads,” one of the album’s most cinematic cuts. She is placed directly in the spotlight, the instrumental quietly building behind her as the track progresses. Using her highest register, Gibbons delivers a heart-wrenching ballad about clinging onto life despite a seemingly hopeless road ahead.

A rise in the instrumental occurs near the end of the track, with the swell of a stringed orchestra cascading in, appearing as a glimmering sign of hope for the listener. Then, right as the tide is starting to turn, the swell fades away. With despair in her voice, Gibbons echoes the chorus one more time, “How can it feel this wrong? From this moment, how can it feel this wrong?”

Dummy isn’t new to me by any means, but only recently did it really start to connect on a deeper level. I do not at all believe that you have to go through any of the same experiences mentioned throughout the album to appreciate it, but it is certainly more immersive when you’re carrying some extra weight on your shoulders.

Aside from just the sad stuff, this really is about as close to a perfect album as I’ve ever heard. There are genuinely no weak songs, and the massive blending of genres is executed flawlessly. This album is so good that I didn’t even fit in a space to talk about its most popular song, “Glory Box.” It is a worthy finale to an already flawless track-list, ramping the familiar, brooding sound up to epic proportions. If album’s had final boss battles, this is what it would sound like. I will just leave it at that and let you experience the rest on your own.

The care that went into creating this album is clear from the beginning, but really becomes more evident with multiple listens. You will start to notice little details in the background of instrumentals that would probably never catch the ear of a casual listener, but completely enhance the sound of a track for those who take the time to search. Going the extra mile on seemingly small details is what elevates it to the highest of levels.

I’m always mystified with the way that Dummy sounds so of its time while also exuding such an essence of timelessness, as if it were dug up in a capsule from an unknown era. It manages such consistency in tone without ever expressing it in the same way twice.

The ride is anything but straightforward, yet the inevitability of the destination remains the same. Portishead presents beauty in an unconventional form. Dummy is honest with us. Not all endings are happy, and not every tunnel has a light waiting on the other side.

By Allison SchroederWeb Content Contributor I started watching “American Idol” when I was around 10 years old. The first season I watched from the beginning to the end was season 10, the season with “American Idol” contestants Scotty McCreery, Lauren Alaina and Haley Reinhart. Throughout the entire season, I imagined these three in the top three positions and hoped that Scotty McCreery would win, because at the time, I lived […]