Here’s What You Missed: Eli Josef at The Ballroom

For the first time since November 2021, it was no surprise that Eli Josef’s comeback to the stage this past weekend was full of excitement and energy- making the performance an undeniably memorable experience for all of us who were lucky enough to attend.

Kickstarting his musical career at 17, Josef’s discography is refreshingly new. First receiving widespread social media recognition in 2019 from a track off of his first album, I Love You Aubrey Plaza, Josef found himself with the newfound attention of international audiences- as well as the attention of Plaza herself! While significant popularity for early work may spell disaster for some premature artists, Josef has since proved to his admiring audiences that he is no “One Hit Wonder.” Doomsday Disco, Josef’s most recent album as of January 2021, offers itself as an applaudable extension to what fans consider only the beginning of the singer’s rise in fame.

The San Marcos native, along with his talented band of best friends, took to the stage on February 19th at the local Austin venue, The Ballroom. Along with the affectionately offbeat atmosphere that seemed to attract every indie twenty-something in a fifty-mile radius, the night’s line-up was spectacularly curated, with the event being promoted in association with local names like Dice House, Valice, and Telecom. Though they were the last set of the night, Josef’s set took over the room and reignited the interactive crowd.

Throughout the length of his set, it wasn’t hard to smile at the heartwarming connection between Josef and his audience of close friends. Quick to dedicate his song “O Susanne” to an onlooking friend’s mother, the familiarity of Josef’s stage presence made the enjoyment of his music all the more accessible. As the night went on, Josef and his bandmates began passing out a colorful assortment of party hats for it being, what they had deemed to be, “about that time.” The band began to sing “Happy Birthday” to Jamey, an attending audience member and friend of the band, and dedicate their performance of “Chair Outside In The Sun” to them as well.

In addition to songs of their own, Josef and friends cover of Neil Young’s “Rockin’ in the Free World” certainly proved itself to be a crowd favorite. The Ballroom’s intimate stage made itself a favorable environment for the manifestation of an impressive mosh pit and crowd surfing combination; though the surge of energy could only be credited to Josef himself, as he would pass the microphone off to a different band member each time before throwing himself off the stage into the enthusiastic congregation.

Josef concluded the night in response to a sweeping encore, a request he happily obliged. An uproar took over the room as the first chords of “Doomsday Disco” filled the air, leaving his adoring audience with the perfect end to an unforgettable show.

It is safe to say that Eli Josef had a way of making memories last Saturday night- and I wouldn’t have wanted to spend my weekend any other way. 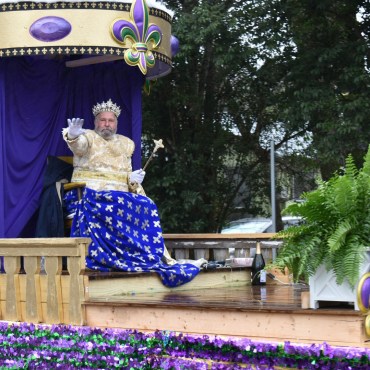 By Autumn McGowan Web Content Assistant Manager Mardi Gras visited the streets of San Marcos on Saturday, February 26th as The Mistick Krewe of Okeanos celebrated its’ 10th annual parade and after-party.  It was a cold and rainy morning, but that didn’t stop San Martians from gathering along the parade route, eager to catch beads, cups and doubloons.  The parade started at noon and made its’ way through The Historic […]