With the news that spill tab will be coming to Austin on October 7th, 2022 for this year’s Austin City Limits, I wanted to do an artist review with her latest singles “Splinter” and “Sunburn”. Spill tab is a French Korean American singer/songwriter named Claire Chicha who released her first song “Decompose” in September of 2019.

“Splinter” was released this past May and the song begins with a soft and light sound that almost feels contorted every few seconds. Then it takes the first 30 seconds to build that soft, altered pace into the slow build of the main tempo. The sound that this gives off is pretty but also very melancholy and gives a strong haunting and hovering feeling throughout the chorus. The song’s lyrics add to those haunting feelings by explaining her ideas behind what it’s like to have to sustain love. The lyrics also contain a lot of imagery of what it feels like to be on edge and confused about whether or not putting this much work into love is actually worth it at all.

“Sunburn,” released on March 28, 2022, jumps right into lyrics as this artist lets out her frustration as she sings to someone that she doesn’t want to wait around for them to finally make things official. The music and beat suggest that this is a faster and angrier song where she is putting her foot down to let her significant other know that she deserves more than this game that they’re playing. She reiterates this point when she ends the song with an abrupt “I don’t,” which I’m sure the conversation she had with this partner went exactly like that: an abrupt stop to their relationship since they couldn’t make up their mind.

Spill tab could be considered much more of an indie artist rather than an alternative one; however, I find a lot of similarities in their sound and with Melanie Martinez and Clairo. I find the similarities with Martinez are derived from their voice pitch and their beginning sounds in each song. Martinez incorporates the use of different toys to create an interesting, eerie-sounding introduction, which gave me the same feeling as “Splinter.” Their voice is also very similar because they both give off a very smooth and higher-pitched sound, but still have a raspy feel to the music. Spill tab is similar to Clairo with the indie-sounding rhythms and beats that are produced in their work.

Spill tab opened for Wallows on July 5 for their rescheduled Austin show, and this was the first time that I had been introduced to their music. Now, Spill Tab will travel with Boyish on their first headline tour, “The Big Juicy Tour.” The tour will begin in Los Angeles on the 9th of September and end in Atlanta on October 5th, 2022. 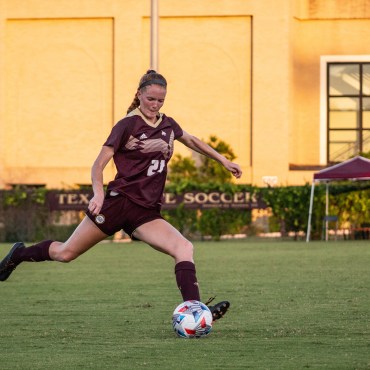 Joey Gonzales Sports Reporter Last fall the Bobcats completed their 23rd season under the direction of head coach Kat Connor. Texas State finished the season with a 7-8-2 overall record and 4-5-1 performance in the Sun Belt Conference. In November, Connor announced she would leave the program a week after the season concluded. Feb. 9, marked a historic day in Texas State soccer history when Steve Holeman was announced the […]