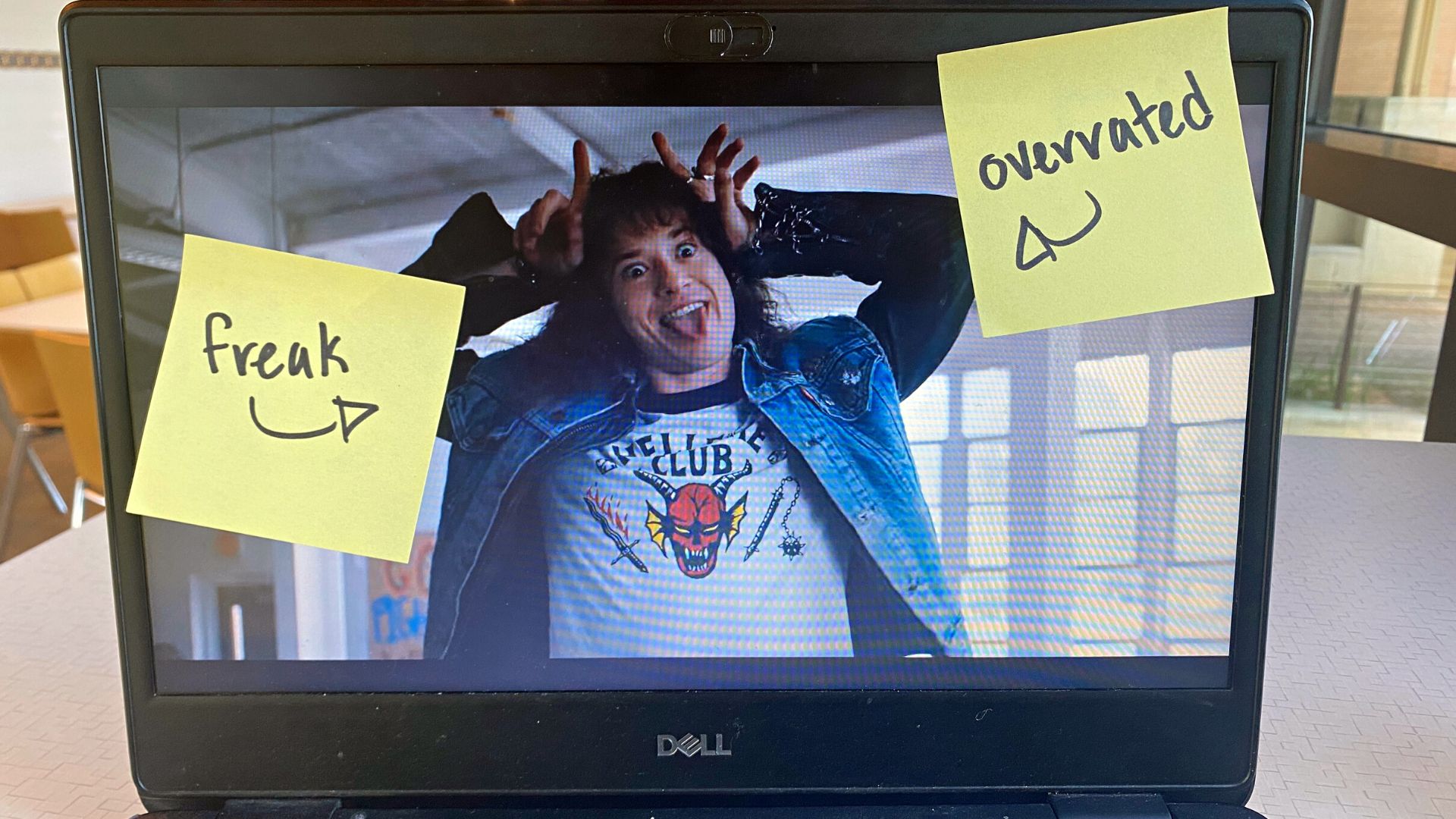 Stranger Things season 4 volume 1 was released May 27, 2022, and has since made a significant cultural impact. I associate the initial debut of the series with the revival of Winona Ryder’s acting career and the emergence of a new science fiction saga.

Each season introduces new side characters to interact with the central reoccurring characters and to add to their development as teenagers. One character critical to the plot of season 4 and the Internet’s latest obsession is Eddie Munson, played by British actor Joseph Quinn.

I must admit something: I have never watched “Stranger Things.” Despite all my family watching the series as it debuted, the series premise never resonated with me. Like many, I was introduced to the character of Eddie Munson through the viral “Chrissy, Wake Up” audio that went viral on TikTok shortly after the season premiered, but I couldn’t have imagined how much attention the character would receive and how relevant the actions of the fandom are today months later.

According to Cambridge Dictionary, fandom refers to a group of fans or the state of being a fan, especially a very enthusiastic one. Fandoms frequently arise around TV shows, movies, book series and in this case, individual characters.

Not every “Stranger Things” fan is a part of the Eddie Munson fandom, but every Eddie Munson “stan”, or obsessive fan, is undoubtedly devoted to the Netflix series. Many members of fandom culture self-identify with outcast tropes for their self-labeled unconventional interests and behavior.

Fandoms are also notorious for their online behavior and are subject to cyberbullying by casual fans or those removed from the online scene altogether.

One thing I wanted to have a better understanding of is why “Stranger Things” fans connected so well to Munson’s character. Numerous fans resonated with Munson’s defining characteristic as a social outcast. Munson’s character is the outspoken leader of a Dungeons and Dragons club, named the Hellfire Club, who receives mocking from other classmates.

Another relevant reason for Munson’s popularity is the deliberate design of his character. Specifically, teenage girls have admitted online to being attracted to his character and his bad-boy persona, a popular teenage media trope. As one of my sources plainly stated, “He’s hot. Duh.”

Whether it was because of his endearing and offbeat personality or his looks, Munson developed a fandom of his own that expanded outside the realm of the “Stranger Things” community.

Since the character’s debut, fans have created online content dedicated to Munson that has been labeled cringe-worthy, uncomfortable and weird. On TikTok, users lip-sync to audios taken from the show dressed as Munson wearing his Hellfire Club t-shirt (which is currently sold out from Hot Topic). Video edits where fans insert themselves into the setting of “Stranger Things” to interact with Munson have also been popular to hate on TikTok.

On July 22, 2022, solo artist SAPPHIRE released “Eddie’s Song” on streaming services in mourning for the character from the perspectives of the other characters. The song has been shared and reacted to on TikTok by fans and haters alike. To Munson fans, the fan song is an emotional dedication to a dear character who never deserved to die. However, the consensus outside of the fandom is that the song should have never been released.

Fans have also made a variety of lifestyle choices to be more like their favorite character. Munson’s interest in Metallica and playing guitar has motivated the fandom to learn and repeatedly stream Metallica’s “Master of Puppets.” Shortly after the season four finale, the song entered the Billboard Hot 100 for the first time since its release 36 years ago.

Several TikToks also show fans dressed in cosplay at conventions across the country for fans to meet up and sing along to the viral “Chrissy, Wake Up” audio that everyone else seems to be sick of hearing.

Speaking of conventions, Quinn has made several convention appearances to meet fans who can afford to travel and attend. But to the disappointment of fans, users shared that because Quinn had so much demand for photo ops, convention staff only allowed fans to spend a few seconds of quality time with the actor each.

Last but not least, Change.com user “the fans of eddie munson <3” created an online petition to bring back the beloved “Stranger Things” character. Remarkably, this petition has gained over 85,000 signatures in a little over two months.

One signer said, “…killing him was probably the worst decision you could’ve made, and I hope you suffer like we do because of it.” Another signer said, “We need Eddie Munson back. He deserves a redemption, he was definitely a hero.”

I may not be a part of the Eddie Munson fandom, but I can certainly relate to the strong devotion fans feel toward their favorite shows and characters. When I was in middle school, I was a part of multiple fandoms prevalent on Tumblr and other social media websites. When I had no one to talk to about Doctor Who or Sherlock at school, social media was the only way I had to connect with like-minded fans. For the most part, this fanbase feels the same way.

Just from observing Internet behavior, it’s not unreasonable to conclude that the majority of Eddie Munson stans are teenage girls and young adult women. The Internet has delighted in bringing down fans for their “strange” demonstrations of adoration and how they feel entitled to see Munson return to the show, but is it fair to say that the Eddie Munson fanbase is doing anything unique to Internet fandom culture? Most people versed in the scene would say no.

How I expressed myself as a part of several fandoms and how I saw other young girls participate in fandom culture have largely remained the same. For instance, I asked my parents for fandom merch for my birthday and Christmas. I also cosplayed as my favorite characters at local conventions I convinced my parents to take my family to. I even wrote an unpublished, lost fan fiction featuring one of my favorite Doctor Who villains. I saw all these things as normal ways to demonstrate how much the show meant to me at 13-14 years old.

Although TikTok wasn’t around in this era of Internet culture, fandoms took to other platforms to create similar content around the media properties they consumed. For example, YouTube was the most relevant online platform to upload fan songs/parodies and fan edits of their favorite characters or scenes. I remember being blown away by how intricate and well-produced these songs and edits were because they encapsulated the creativity and devotion fans had toward their favorite properties.

Many teenagers dedicated entire pages on Instagram or Tumblr to share text posts, photographs or fan-made gifs and artwork that became dominant sources of fandom content for all other fans. Outside of the Internet, people could express themselves by wearing fandom merch or cosplay as their favorite characters even outside of conventions.

Even though I was bullied throughout middle school by my peers for obsessing over shows they had never heard of, the Internet became a safe space for me to enjoy my favorite shows without shame. Somehow, I never came across hate or criticism for loving Doctor Who, the MCU, or most other fandoms (unless it came from within the fandom itself). I was secluded to the fandom side of the Internet the same way Eddie Munson fans belong to their own side of TikTok.

As much as I see people on TikTok feeling nostalgic over trends from over 10 years ago, I can’t help but wonder if they are dismissive or regretful over the side of Tumblr devoted to fandom culture. After all, the culture was instrumental in establishing fandom behavior as we see it today.

No Eddie Munson fan has had an original experience of relating and dedicating their entire online presence to an outcast character, but that does not make their experiences any less valid.

Inherently, fandoms are validated in their love for their favorite series and characters, but does that mean that fandoms can get away with cringe-worthy or even disturbing online behavior? Definitely not.

Whether in defense of their fandom or due to unrelated lifestyle choices and beliefs, there are stans of certain media properties that previously have gone too far. A “toxic” fandom is associated with abusive or polarizing behavior that ultimately leads to the media properties taking a blow to their reputation. Even when stans aren’t necessarily doing anything wrong, shows like “Stranger Things” become associated with a fanbase that’s cringeworthy and annoying. Hence, everyone experiences a loss.

It has been well documented that sects of fandoms have displayed controversial behavior. Toxic fandoms have been known to cyberbully or attack those who do not agree with them. Even going so far as to attack the creators of the media properties they adore. The term “#ihatethedufferbrothers” (referring to Matt and Ross Duffer, the duo largely behind “Stanger Things”) on Tumblr brings pages of content of fans criticizing Munson’s death and “screwing up” the show.

One defense teenagers employ to combat the hate their fandoms receive is that their behavior should be excused because they are teenagers. It would be cruel and unusual to cyberbully a teenager because teenagers are entitled to make mistakes on the Internet, but this belief does not sit right with me. No one is entitled to spread negativity over social media. This goes both ways between fandoms and mainstream culture alike.

When I critically look at how Eddie Munson fans behave online, I see a new wave of the online culture I embraced 10 years ago. As I mentioned earlier, there is nothing wrong with identifying with outcast characters or quirky shows. The problem arises when fans cannot productively use social media to create a community amongst themselves. Instead, they isolate themselves by creating toxic fandoms which reflect negatively on the entire fanbase and the media properties themselves.

Everyone, especially teenagers, makes regrettable decisions on the Internet. I remember the content and memes I would share online on my social media profiles and cringe with embarrassment. There’s a good chance that some Eddie Munson fans will walk away from the fandom many years later and feel the same embarrassment I did.

In the meantime, let’s treat all fandoms with respect online no matter how cringe-worthy they may seem. Let’s also hold fandoms accountable for toxic online behavior instead of inciting negativity. 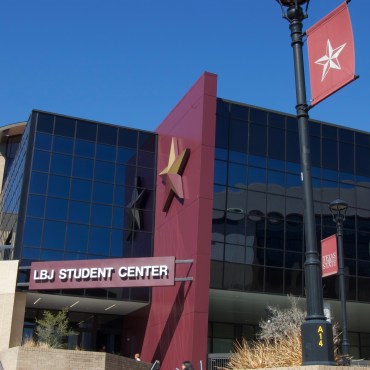 Will You Receive Relief Through The Biden-Harris Administration Student Debt Plan?

Jordan Young News Director Last week the Biden administration announced its long-awaited plan on a pillar campaign promise of student loan forgiveness. The announcement came after months of inner administration talks on how to fulfill President Biden’s promise.  Upwards of 43 million Americans can expect some sort of relief. The plan will remove up to $20,000 of debt for Pell Grant recipients; Pell Grants are a type of aid available to low-income […] 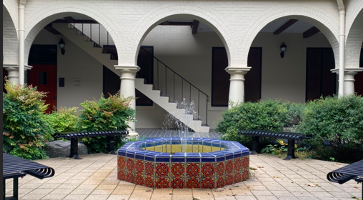