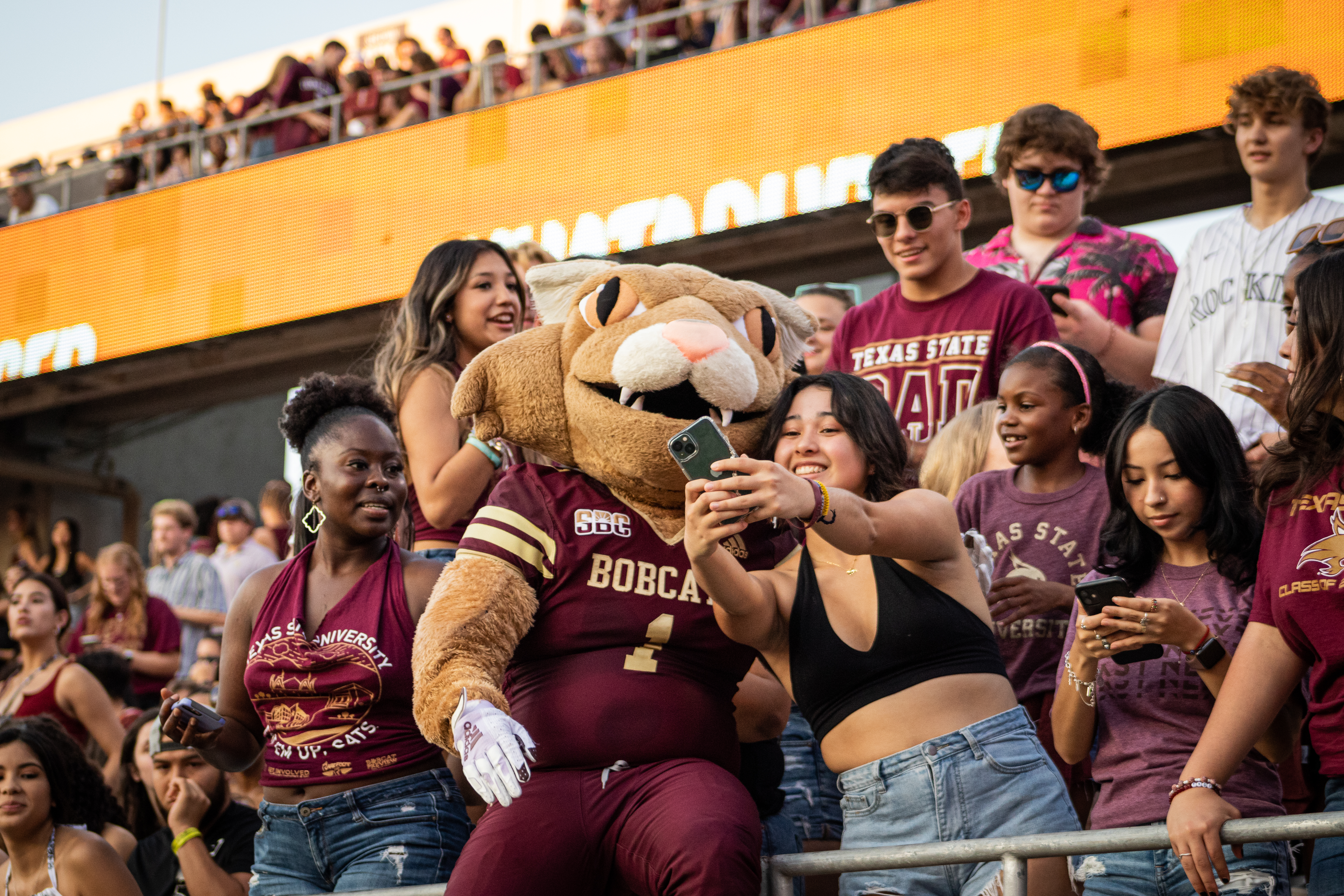 Under the Texas heat and full moon, Texas State won its home opener against Florida International University Saturday night at the Wack, 41-12; it was the first home opening win in the Spavital era, the program hasn’t had a home opening win at Bobcat Stadium since 2018.

The Bobcats started the game slowly resembling a team from last week versus Nevada, with the first offensive drive ending in a punt. In contrast, the defense came out flying, holding the Panthers to just one-yard rushing. Led by Sione Tupou, Jordan Revels, and Jarron Morris, the Bobcat’s defense forced FIU to punt 2-3 offensive drives in the first quarter. The Bobcats capitalized on FIU’s missed opportunities by scoring a field goal; then a 67-yard touchdown pass by junior quarterback Layne Hatcher to transfer wide receiver Charles Brown. The Panthers got on the board at the end of the quarter with a field goal.

The second quarter brought good play from both sides of the ball. The offense found its groove building off the touchdown pass in the previous quarter; Hatcher connected with Javen Banks for a 57-yard touchdown pass. Texas State had 178 passing yards by the end of the second quarter,  more than the entire game last season versus FIU. Hatcher threw an interception under pressure to close Texas State’s last legitimate drive of the first half with 2 minutes left; Hatcher made a few ill-advised throws when under pressure throughout the game. The run game for Texas State never clicked like the passing game with only a few good runs sprinkled throughout the quarter.

The Bobcat defense was the best unit on the field and their spectacular performance continued in the second quarter. Kordell Rodgers intercepted the FIU quarterback Gunnar Holmberg. The defense held the Panther offense to six points in the first half with FIU kicker Chase Gabriel making a field goal with 6 seconds left in the half.

The Panthers headed into the lockeroom down 6-20, Texas State’s defense smothered the FIU offense holding the Miami team to 34 yards and 93 passing yards. In comparison, the Bobcats had 178 passing yards and 56 rushing yards, and a 54-yard field goal by mason Shipley.

The third quarter saw the heartwrenching injury of junior cornerback Chris Mills. The stadium went silent as Mills laid on the FIU sideline, surrounded by EMTs, coaches, and trainers from both teams. The tragedy highlighted the beautiful thing about sports, it brings people together. Several moments reminded the crowd of that, one being an assistant FIU coach comforting Mills’s mother on the sideline. Another came when both teams knelt in prayer as Mills was carted off the field. At this time there is no update on Mills, coach Spavital said that Mills was taken directly to the hospital.

Texas state nor FIU managed to put points on the board in the third quarter, understandable after the injury. The Bobcat offense seemed to get conservative with coach Spavital increasing run plays.

In the post-game, coach Spavital said that was a part of the game plan, “I’m always trying to run the football, we were inconsistent in the first half.”

Coach Spavital’s search for a run game hit gold in the fourth quarter, sophomore running back Calvin Hill had two big runs in the fourth taken back due to a holding and unsportsmanlike conduct penalty; the untimely flags didn’t faze Hill, “That didn’t matter to me, I have the mindset of whenever I touch the ball I’m going to make something happen, regardless of what happens,” said Hill.

Like the infamous Usher meme, Hill said, “watch this” running up the middle for 27 yards setting up a 7-yard touchdown pass to Aston Hawkins. Hill eventually got his taste of the endzone with a 25-yard touchdown run to seal off a career game for the back. Calvin finished with 195 rushing yards; after the game, he thanked his offensive line for helping him get the achievement.

A 6-yard rush by junior EJ Wilson gave FIU its only touchdown of the night. The Bobcat defense which pounced on FIU players all night responded 6 minutes later with a pick-six by Kordell Rodgers a fitting ending to a great game by the Texas State defense.

For his first game in the wack QB, Layne Hatcher played a good game finishing 15-30 passing for 226 yards accompanied by three touchdowns and one interception.

The first home-opening win brought 18,757 Bobcats together and President Damphousse on a motorcycle. It was a home opener that Bobcat fans deserve and have been waiting for since coach Spavital took the reins.

The Bobcats travel to Waco next week to play the Baylor Bears at 11 am. The game will be broadcast on KTSW 89.9.

By Preethi Mangadu Chief Editor of News HAYS COUNTY, Texas— An autopsy report confirmed fentanyl overdose as a 4th student's cause of death in Hays County CISD. The U.S. Drug Enforcement Administration (DEA), Kyle Police Department (KPD), and Hays County Sheriff's Office met to discuss concerns and a plan to manage the rise of fentanyl Thursday. On Wednesday night, the school board informed parents a 15-year-old-student's death in July was […]