Wind, rain and humidity weren’t enough to stop the Million Student March. With megaphones, banners and signs in hand, students marched across campus to spread their message to the student body, faculty and administrators.

According to a report from The Institute for College Access and Success, there is total amount of 1.2 trillion dollars of student debt in the United States and an average debt of 26,000 thousand dollars per student nationwide after graduating.

The students marching met in front of Old Main and continued to the LBJ Student Center, where many followed behind those who were holding banners. 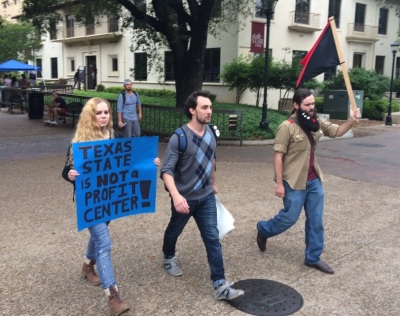 While some protesters chanted along to sayings such as “Fight! Fight! Fight! Education is a right!” other students like Ryan Cook said, “student debt is too damn high.” Cook, who helped organize the protest, believes that student debt has become a “systemic thing” that is “taking place across the country” and affects everyone.

Cook believes students must not only focus on the immediate protest, but also “continue to press [the] administration, press the state legislature and press anyone who is involved in this systemic corruption” that is allowing for students to graduate with crippling debt.

While protesters marched across the rainy campus, many students who were walking their daily route to class didn’t hesitate to state their opinion. One student, who was obviously opposed to the movement, said “Join the military, they’ll pay for it [tuition], I promise.”

Others, like Kristoffer Celera, believe that “education is not a right, education is a privilege.” Celera said that “as an immigrant of a third-world country,” he doesn’t believe that the public should have to pay for his personal education and students shouldn’t have the belief that they “can study wherever they want and the public will pay for it.”

Though protesters could be heard across Texas State, the movement is taking place across the nation and Cook mentioned various events to follow the #MillionStudentMarch protest.

“We do not plan to stop until we are heard,” Cook said. “We attempted a dialogue with administration for the past few months now about a student tuition advisory board so that we may be represented on campus in a meaningful way, but they’ve ignored us so far.”

Countless students like Cook promise that this isn’t the last time they will be marching and won’t stop until they are heard and see a change.