The Rattler’s last playoff appearance was in 2017 against Round Rock Westwood. San Marcos won 64-50 before falling to Houston Westfield in the second round. The Rattlers completed their 2021 regular season with an overall record of 5-5 (.500) and 4-3 in District 26-6A.

Throughout the regular season, the Rattler’s offense was anchored by running back Jaidyn Brown and quarterback Isaiah DeLeon; contributing around 40 percent of the touchdowns scored during the regular season; Jaidyn Brown alone accounted for 30 percent. The dynamic duo also had a yard total of 2,410 on the year, with Jaidyn Brown leading the pack with 1,480 and Isaiah DeLeon with 930. The star players accounted for 58 percent of the total yards on the season.

Headed into the playoffs, the Rattlers will face a Vandegrift team (ranked 24 in 6A) with no shortage of playoff experience.

To combat this, Coach Walsh and his staff have been “painting the picture” of the playoffs all season long.

“[I’ve been] telling them stories, you know, they know that our staff has been in the playoffs,” Walsh said. “We talk about painting that picture all season long. Well, I gotta paint a good playoff picture and I started tonight by letting them know.”

The championship head coach and his staff are no strangers to facing tough opponents. During the season, the Rattlers have played Lake Travis and Westlake (who have won multiple state championships in recent years). Coach Walsh knows that Vandegrift is a talented football team as well.

“They’re a great football team. I have watched and they’re gonna be tough out,” Walsh said. “But they can get out and I’ve played in a lot of playoff games.”

Vandegrift’s defense has played well, holding six of their opponents to single digits scores. The San Marcos football team will need its young stars to play a clean game against Vandegrift.

The Rattlers will have to lean on its lethal run game anchored by quarterback Isaiah DeLeon; The junior quarterback spoke about what the team is doing to prepare for Friday’s matchup.

“It’s been a lot more — not cutthroat, but just more attention to detail,” DeLeon said. “Trying to just get everything to perfection and as good as possible.”

The renewed faith in the football team brought by coach Walsh is an achievement in itself. No matter the game’s outcome, the Rattlers can look back at the season with pride with ending a four-year drought.

San Marcos will face the Vandegrift Vipers on Friday, Nov. 12, at Ed. W. Monroe Memorial Stadium in Austin. Kickoff is set for 7 p.m., and you can listen live on KTSW 89.9, where Kyle Owen and Gage Sutton will be on the call. If you can’t catch the game over the airways, you can always keep up on Twitter from KTSW Sports’ Twitter account, @KTSWSports. 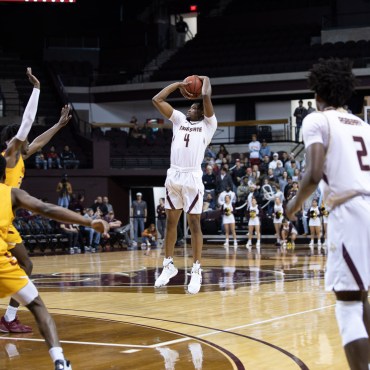 By Carter Bordwell Sports Reporter After a season-opening 75-57 victory over Incarnate Word, the Texas State Bobcats will continue its five-game road trip against the Louisiana State University Tigers. The Bobcat men's basketball team, 1-0, will take on the LSU Tigers, 1-0, Friday, Nov. 12. The Tigers are known for a high-scoring offense, while Texas State has gotten a reputation of grinding out defensive wins. The Bobcats led the Sun […]