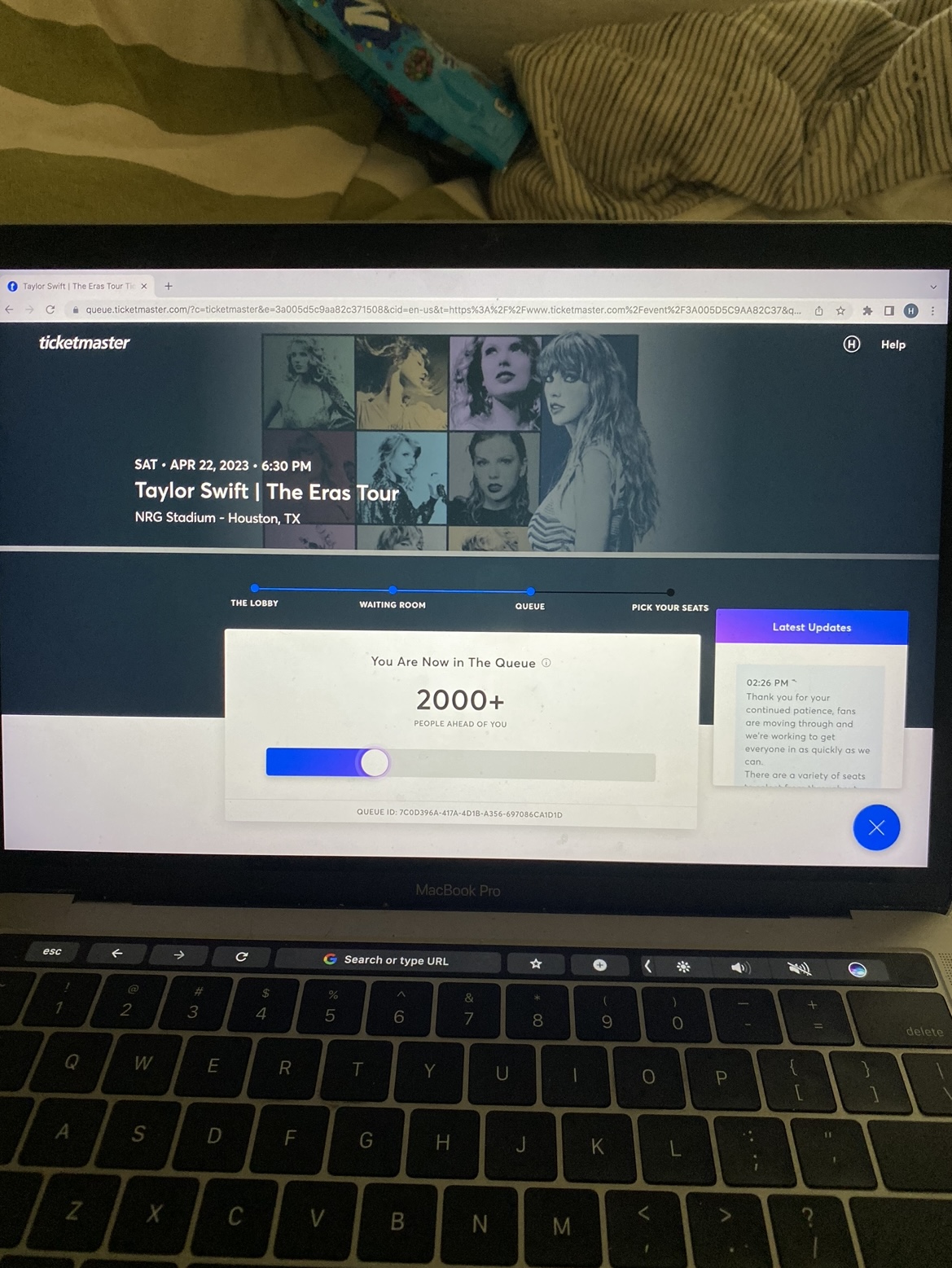 In a world still recovering from a pandemic that lasted two years and shut down the entire live music industry, it should come as no surprise that music fans are pumped for opportunities to see their favorite artists perform live. We, as devoted stans of these iconic musicians, stream the albums, watch the music videos, buy the merch, and wait patiently for our fave to announce their upcoming tour. A tour announcement from an artist you and your friends love can spark some really fun discussions, as everyone gets the chance to talk about the songs they hope make the setlist or the outfit they plan to wear to the show!

Such was November 1, the day Taylor Swift announced her upcoming Eras Tour, a “journey through the musical eras of [Swift’s] career (past and present!).” After Swift’s nearly four-year break from touring and the massive success of her 10th studio album, Midnights, Taylor’s army of Swifties, myself included, were understandably excited. We’d finally get the opportunity to crowd the largest stadiums across the country and sing along to our favorite songs from Swift’s very long and impressive discography.

For this tour specifically, Taylor and her team allowed fans to register for presale codes through Ticketmaster’s Verified Fan program. When my friends and I received two presale codes the night before the Verified Fan presale, we thought getting four tickets to one of the three Houston dates would not necessarily be easy but still be achievable, as long as we showed up on time, entered our codes, and patiently clicked around until we made it to the checkout screen. But of course, if it’d been that easy, I wouldn’t be sitting here writing this article, would I?

My two friends, Hayden and Brooke, got together on the morning of Tuesday, November 15, and entered the Ticketmaster waiting room, as they were instructed. They waited patiently for the clock to strike 10 a.m., and when it did, nothing really happened. At 11:16 a.m., Ticketmaster updated everyone, letting them know that the queue had been temporarily paused and that the start of the presale had been delayed. Finally, at 1:59 p.m., Ticketmaster thanked those in the waiting room for their patience and informed them that they were “just getting started.”

Many fans of Swift, my friends included, experienced delays in the queue and a multitude of glitches and website crashes once they got to the page where one is supposed to be able to select and purchase tickets. Twitter was on fire that day, as Swifties rushed to the platform in droves to vent about their frustrations with Ticketmaster’s clear lack of preparation for the Verified Fan presale event.

After several hours of unsuccessfully trying to buy tickets and constantly being told that “another fan” had beaten us to them, it was clear to my friends and me that it was not our lucky day. We’d simply have to wait for the general sale, scheduled for that coming Friday, to secure our Eras Tour  tickets.

On Wednesday, however, a friend reached out to me. She knew that my friends and I had had no luck trying to get tickets the day before, and she offered to let us use her Capital One card to access the Capital One presale, which was taking place that same day. My friends and I gathered, and just like the day before, we waited for the presale to begin. Surely, we’d be able to secure tickets! Or so we thought. This time, the presale started on time, but the tickets disappeared before our eyes even more quickly than they had the day before.

Our second unsuccessful attempt at getting tickets was even more demoralizing than the first, but like I said before, we were prepared to wait for Friday’s general sale. The next day, I received a FaceTime call from the same friend who had offered to let us use her Capital One card. “Ed, Ed, look what I just sent you! Go to Ticketmaster’s Twitter right now,” she said, with panic in her voice.

I did as I was told, and there it was.

“Due to extraordinarily high demands on ticketing systems and insufficient remaining ticket inventory to meet that demand, tomorrow’s public on-sale for Taylor Swift | The Eras Tour has been cancelled.”

My friends and I were stunned. We’d been forced to put all our hope into getting tickets at the general sale, so to hear that it had been cancelled felt like a punch to the chest. We knew that the situation was bad enough to make headlines and warrant some sort of statement from Taylor or her team, and the next day, we got exactly that. Swift posted a three-paragraph statement to her Instagram story, explaining that it was “excruciating for [her] to just watch mistakes happen with no recourse.”

And though she didn’t name Ticketmaster, her statement made it clear that the company misled her and her team about the kind of demand their system could handle. This entire situation has caused Ticketmaster’s reputation to be dragged through the mud, and we’ve even seen several state attorney generals and the U.S. Department of Justice announce investigations into Ticketmaster’s business model.

As the legal experts and the elected officials figure out what to do with Ticketmaster and their shady business practices, the company still needs to decide what to do with the remaining tickets. I think the best and most fair solution would be for Ticketmaster to hold another presale. To avoid the site crashing, they could do a separate presale for each city on a different day, require users to enter their codes before entering the queue, and establish a limit of two tickets per purchase. That way, scalpers can’t snatch up six tickets just to resell them. I think a fair and well-run presale would get the remaining tickets into the hands of true fans and might net Ticketmaster the positive PR they desperately need right now.

Sarah Lins Community Outreach Coordinator Here at KTSW, our Community Relations department has chosen Texas State Ice Angels to be this month’s organization of the month! This past week I had the pleasure of getting in contact with the president of Texas State Ice Angels, Jonnalys Soto. During our interview I was able to learn more about Soto’s role as president and all that goes into their awesome organization. Ice Angels is a group of young women here at Texas […]