Weezer’s newest seven-song release appropriately encapsulates the heated angst exuded by summertime. At first, listen, I questioned if the band willingly sacrificed doses of their artistic integrity in order to make palatable radio hits. It wouldn’t be the first time an early 2000s band abandoned sincerity for a cash grab.

Ironically, the song I respect the least on a fundamental level is one of the most enjoyable to listen to. Initially, the second track, “Records” felt like an attempt for airtime but as I allowed my cynicism to fade, I realized it’s true to Weezer’s style. The reason I thought it was disingenuous is due to the severe name-dropping, referencing Rihanna, Lana Del Rey, and Nirvana in a 15-second interval. The song is about being addicted to music and constantly having songs oscillating in your head, a message that starts to coincide with the song’s structure; the lyrics “I hear records in my head everywhere that I go” and “They go ‘round and around and again”, are repeated consistently. “Records” by Weezer is a cleverly ironic statement about the catchy replayability of radio songs, fluently mimicking the format of these shallow earworms.

My favorite song on the album was “Lawn Chair”, which focuses on feelings of frustration due to the idleness of God. The song begins with violin, which is atypical for Weezer and I assumed was utilized to create a “holy” tone. The lyrics sang during the string portion are from the third person point of view, watching God in heaven call on the theological archangels, Gabriel and Michael, to torture the people on earth out of boredom. The violin stops and heavy guitar enters, with the narrative portion ending and Rivers Cuomo beginning his direct address to God. Cuomo calls the alleged divine entity a “punk-ass”, saying “unsatisfied with rain, you made tears” and “[you] threw out your baby expecting we’d praise ye and worship your name” as a reference to Jesus crucifixion. The song ends with Cuomo revealing his bitterness is rooted in witnessing the pain of someone he cares for. Cuomo says “Now she’s gasping for her breath, she didn’t ever hurt no one” with a choir softly echoing, “Please tell us why” in the background. The song is titled “Lawn Chair” to insinuate God is sitting back casually while watching people suffer. I love songs with severely controversial messages like this. I also appreciate that it’s the very first track on the album and is promptly followed by the most accessible song on the album, “Records”. The placement of such juxtaposed tracks feels both clever and intentional.

The last song I found notable was “Blue Like Jazz”. I was impressed with its repeated use of color synesthesia, a concept frequently utilized by Weezer, as seen through their color-coded albums. The symbolism was incorporated through the title and lyrics such as, “You solved the Rubik’s cube, turning the orange into yellow into blue.” and “My face is red, your bill is due”. After further research, one finds that “Blue Like Jazz” is the title of a book about non-religious thoughts on Christian spirituality by author, Donald Miller. Although this idea is unconfirmed, the content of the book goes hand in hand with the song; Blue Like Jazz is a series of essays about internal struggles: searching for God, envying the way others love their faith, wishing to resonate with conformity, feeling like self-discipline is virtually impossible, being jealous of those who make everything seem so easy, and the hypocrisy of devout Christians who are ultimately don’t practice what they preach.

These concepts can be directly correlated to the lyrics in the song. For instance, the line “I see your soul and its black. It’s black and it’s blue, blue like jazz. Show me how to be cool like that.”, relates not only to the idea of Christian sanctimony but also the reason behind the book’s title. Miller named the book after an experience he had with a street performer playing the saxophone. Until this point, Miller had never cared for jazz music but was so moved by the saxophonist’s passion it sparked his own. He related the experience to religion, saying “Sometimes you have to watch somebody love something before you can love it yourself.” Since Cuomo is referring to the subject as being “blue like jazz,” it can be inferred he is both aware and affected by the subject’s religious identity while also insinuating they are ultimately bad-natured. He satirically says, “show me how to be cool like that” reinforcing his tone with color synesthesia by diametrically contrasting himself with the subject by singing, “my face is red.” Although this line is brief, it illustrates that Cuomo, as the red-faced observer, sees himself and the coolly blue subject as opposites, in more ways than one.

Rivers Cuomo is brilliantly obsessive and incredibly passionate. He grew up in Rochester, New York at a Zen Center before moving to Connecticut with his mother and brother; In Connecticut, Cuomo lived in an enclosed Hindu ashram known as Yogaville after his Protestant Christian father left their family. The nature of Cuomo’s upbringing, the actions of his father, and his long-held opinions on religion and spirituality are vital to understanding this album.

As a self-appointed Weezer defender, I am fiercely committing to the benefit of the doubt based on their history of creativity, quirkiness, and double-entendres. When considering their knack for equivocality in combination with River Cuomo’s distinctive childhood, robust opinions, and a degree from Harvard’s School of Music, it becomes clear that the band is capable of multifaceted depth. However, I do find it entertaining that the possibilities are so polarized: Weezer is either violently imaginative and far-sighted, or they have idiots like me seriously fooled. For some reason, I like both options equally. 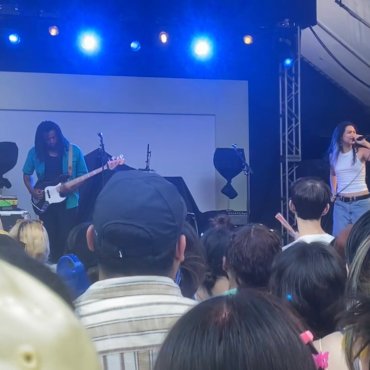 Lexi Delarosa Music Journalist With the news that spill tab will be coming to Austin on October 7th, 2022 for this year’s Austin City Limits, I wanted to do an artist review with her latest singles “Splinter” and “Sunburn”. Spill tab is a French Korean American singer/songwriter named Claire Chicha who released her first song “Decompose” in September of 2019. “Splinter” was released this past May and the song begins with […]